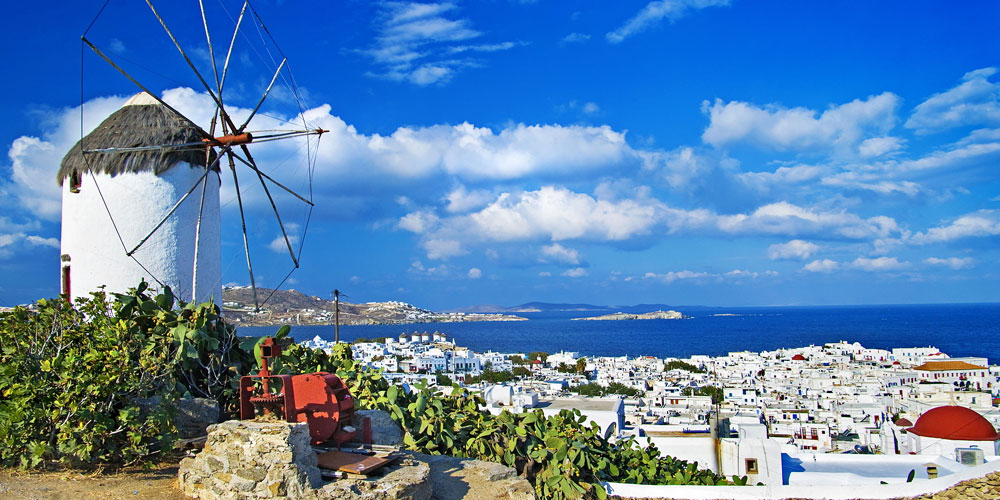 Mykonos is world-famous. It is no coincidence that this, the most cosmopolitan of all Greek islands, attracts so many visitors from all over the globe, including large numbers of celebrities, artists and intellectuals.

Here, the steep mountains encountered in most of the Cyclades, give way to low, rocky hills which combine with innumerable superb beaches. The island is not fertile, so the inhabitants are almost entirely occupied with tourism.

The capital, Hora, with its colourful harbour in which little fishing-boats nestle happily side by side with luxury yachts, presents quite a different picture from the majority of the Aegean island towns. While it is usual for island villages to be built on naturally amphithcatrical sites, Mykonos is spread out over a flat area and conveys an impression of solid aesthetic cohesion.

Along the whitewashed, labyrinth-like streets stand brilliant white box-shaped houses with stepped walls for sitting on, wooden doors and windows and brightly-coloured balconies. These are interspersed with small but impressive churches, pretty little tavernas and shops selling souvenirs and other goods, and the overall sense is of being inside a film-set.

This is probably the way you feel, finding your self walking, eating or dancing among the most famous celebrities in the world. The world of fashion, music and film industry spend their holiday on the island every year.

Of particular historical and aesthetic interest are the medieval houses on the west district of the town, which stand like a wall above the sea protecting that side of Hora. The location is called Little Venice, and the crowds gather to watch the sunset.

Mykonos is also the home of the Nautical Museum of the Aegean, which has interest all of its own, the excellent Folklore museum housed in an 18th century mansion, the Archaeological museum with pottery from Delos, and the Windmill museum on the road to Ornos.