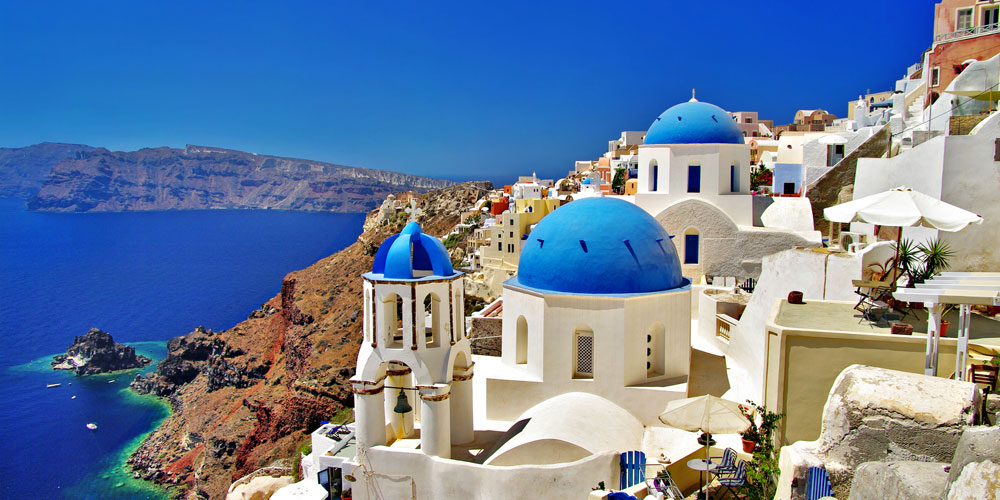 Santorini, one of the best-known of the Cyclades, differs from the other islands in the group thanks to its geological morphology, the result of action by a volcano now dormant. The landscape on the western side of the island consists of towering cliffs, the second biggest caldera in the world, that plunge straight into the depths of the sea. The caldera is crowned by tiny white houses.

The steep coastline of the west is countered by the vast beaches of the east side, some of them sandy and others with pebbles.

Fira, the capital, is very attractive with winding narrow streets, arcades and a quarter where the Catholic nobility once dwell. There is a most important Museum, with prehistoric and other interesting collections. Fira is also the centre of night life of the island. There is a superb view out from Fira to the Kamenes, the two islets of black stone created by the volcano. The islets can be visited by launch.

Ancient Thira is a site of great archaeological interest which was occupied by Phoenicians, Dorians, Romans and Byzantines. Down the centre of the city runs the Sacred Way. The buildings include groups of houses, market-places, baths, theatres, sanctuaries, the residence of Ptolemy Euergetes, tombs of the Archaic and Classical periods and Early Christian remains. On the surrounding rocks the names of the god Apollo and of men and boys are inscribed in the ancient alphabet of Thira.

The site at Akrotiri has yielded the remains of a Minoan city destroyed around 1500 BC by an eruption of the volcano on Thira. In effect, this is a prehistoric version of Pompeii buried beneath volcanic ash, with two and three storcyed houses, with squares, shops, workshops and so on. Among the finds from the houses were marvellous murals (on display in the National Archaeological Museum, Athens), vases, and everyday utensils.

The old-world village of la, 11 km. to the north ofFira, is a place of incomparable beauty and just perfect for those who are looking for a quiet holiday on the island. The unique appeal of la lies in its little houses hewn out of the soft rock (some of them whitewashed, others painted blue or ochre), its neo-classical mansions with their courtyards, its narrow paved alleys. There is a superb view out to sea. Ia prides in one of the most beautiful sunsets in the world. Don’t miss it.

Among the best bathing beaches -some of them with black sand and others with pebbles – arc Kamari, Amoudi, Baxedes ,Perissa, Monolithos and Red Beach. The striking landscape, the peculiarities of the natural environment, the unusual architecture and the outstanding monuments of Santorini attract very large numbers of visitors in the summer.

Thirassia, off Santorini near la, is the largest of a chain of islets formed by volcanic activity and the only one inhabited. Its sole village, Horio, is a pretty place with whitewashed houses, reached by a flight of 250 steps from the landing-place.