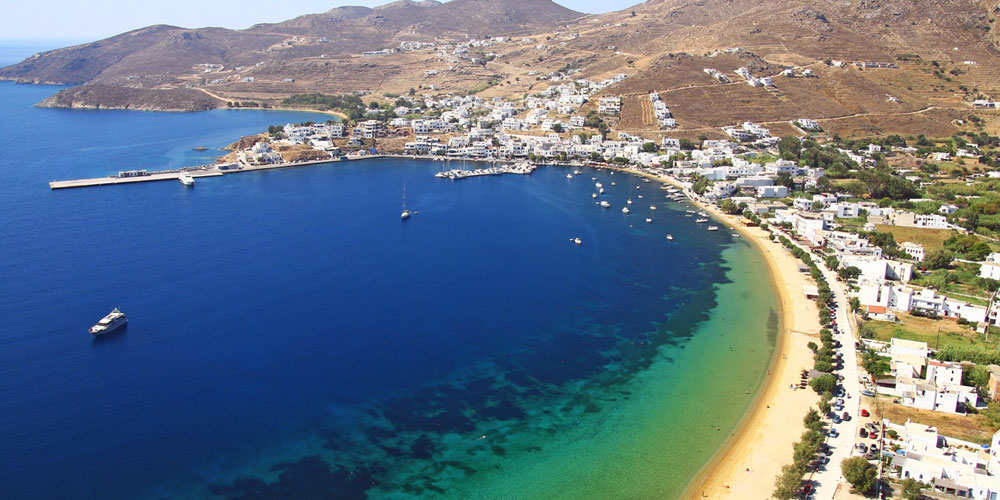 Bare, undulating hills interspersed with small, fertile valleys cover this picturesque island. The rocky coastline is deeply indented with a succession of coves and bays.

The curious rock formations resemble human figures which call to mind the myth of Danae, Perseus and Medusa, as if these prehistoric inhabitants of the island had been turned to stone.

Yachts and ferries call at Livadi the sheltered port on the eastern side of the island, where there is a long, horseshoe-shaped sandy beach.

Perched on the top of a steep hill, Hora or Serifos, the main town of the island, with its little cube-shaped houses and churches in the island style, with its Venetian castle above, looks like a fairytale town.

The village of Panagia commands a panoramic view of the whole island. The greatest attraction of Serifos is its magnificent beaches (Mega Livadi, Koutalas, Agios Sostis. Psili Arnos. Agios loanis, Sikamia). There are no less than 72 beaches, each of them offering opportunity to enjoy swimming in the crystal-clear waters.

However, it is a charm all of its own, something in the unique ‘atmosphere’ of the island, which attracts an ever-increasing number of visitors from Greece and abroad.