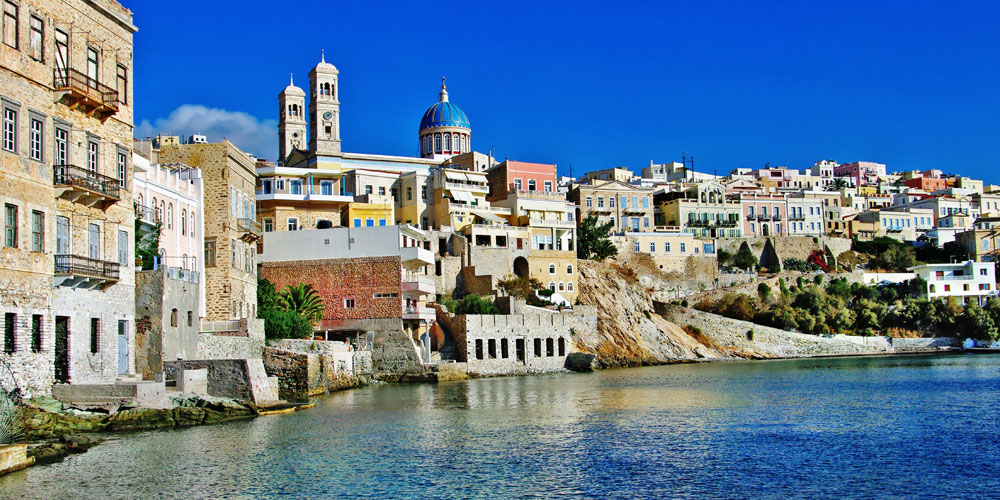 Siros is the capital of the Cyclades group, but it is only recently that it has become a tourist destination.

The island stands out in general for the variety of the landscape in its hinterland, where hills alternate with low-lying farming areas. The coastline is indented with inlets of all sizes between capes. There are two large bays, of Ermoupoli to the east and Finikas to the west. The northern part of the island, Ano Meria, is rocky and with very few inhabitants, but it is ideal for trekking and offers magnificent views to the Aegean.

Archaeological excavations in Halandriani (in the north part of the island) have shown that Siros was inhabited in Neolithic times.Digs have revealed a prehistoric acropolis, a settlement and a burial ground, and yielded artefacts of the Early Cycladic period, some of which you can see at the Archaeological Museum in Ermoupoli.

Ermoupoli, ‘Queen of the Cyclades’, is the capital and main harbour of Siros, on the east coast. As the boat enters the harbour, the visitor is impressed by the sight of two hills, each crowned with a church: the right hill with the Orthodox church of Anastasis, and the left one with the Catholic Cathedral. Both Orthodox and Catholic populations have lived in harmony for ages.

Ermoupoli, which used to be one of the most important financial, commercial and cultural centers in Europe in the 19th century, stands on a naturally amphitheatrical site, with neo-classical buildings and old mansions that reflect the power and glory it once had. Among the most important buildings are the Town Hall (designed by Ernst Ziller) and the Apollo Municipal Theatre, which is a copy in miniature of La Scala, Milan.

The quarter of the town known as Vaporia, where the sea-captains lived, is of special interest. Along its narrow streets stand neo-classical mansions.

Ano Siros (Upper Siros), with its whitewashed houses, walls, narrow lanes and arches, the Capucin Monastery and the Cathedral of St. George, has kept much of its medieval character. The steep streets and countless steps lend the town the charm of a bygone age.

Ano Siros is also the birthplace of Markos Vamvakaris, the master of the Greek rembetika music, which you will have the chance to listen to in the traditional tavernas, while enjoying superb meals.

The southern and western parts of Syros are the most densely-inhabited. The best beaches are also here, including Galissas, a fine, large resort with a long sandy beach; Possidonia or Delagratsia, a coastal area with a good beach at Angathopes and neo-classical houses of great architectural interest;

Vari, with an attractive beach, Finikas bay, Kini and Megas Gialos. There are more good swimming beaches at Kimata, Agios Nikolaos, Ermoupoli, Ambela, Delfini and Ahladi. The beaches of north-west Syros are more difficult to reach, but if you can’t resist visit the beach of Lia, and farther north, Grammata. Grammata is the Greek word for “letters”, and the beach was named after the inscriptions, dating from the Roman and Byzantine period, that were found on the rocks.